GraphQL subscriptions, along with the rest of the spec, are transport-agnostic: that is, the two parties communicating GraphQL don’t need to use a specific way of sending messages. You can even do GraphQL with your friend by passing paper notes back and forth 😄.

Subscriptions over WebSockets is supported by Apollo Server (at ws://hostname/graphql—ws://localhost:4000/graphql in development). In the next section, we’ll see what that looks like with a simple example. Then in reviewCreated we’ll code a more complex example.

The simplest subscription used on the Guide site is for a single integer—the number of stars on the GraphQLGuide/guide repo. As always, we start with the schema:

This means that each subscription event that the server sends the client will contain a single integer and be in this format:

We include our new .graphql file by adding this to the bottom of schema.graphql:

We need a publish and subscribe system to keep track of which clients to send events to. Apollo Server has an interface that all pub/sub packages implement, so whichever we use, the API will be the same. We create an instance of the PubSub class, use its .asyncIterator() method in the subscription resolver, and its .publish() method to send events. Let’s start with the first step, using the in-memory, for-use-in-development version of PubSub included in Apollo Server:

Next we include the resolver:

Now where do we call pubsub.publish()? We have to get the information first. Where do we get it from? GitHub, of course! The first three versions of their API were REST-based, but their v4 is a GraphQL API—let’s use that. Their docs say the endpoint is https://api.github.com/graphql and that we need to create an access token to use the API. Once we’ve done that, we add a new GITHUB_TOKEN environment variable with the token we created:

Now we can use process.env.GITHUB_TOKEN in our auth header to the GitHub API. Let’s put our code in the data-sources/ directory. Even though it doesn’t talk to our database or follow Apollo’s DataSource API (since we don’t need context, a new instance for every request, batching, or caching), it is a source of data used in our app.

The simplest way to make GraphQL requests is with the graphql-request npm package. Now we can call githubAPI.request(queryString), and our query will be sent to GitHub with our auth header.

To determine what our query should be, we can browse GitHub’s GraphQL Explorer (an authenticated GraphiQL). A repo’s star count should be included in a repository’s information, so let’s look for a root Query field for getting a repository: 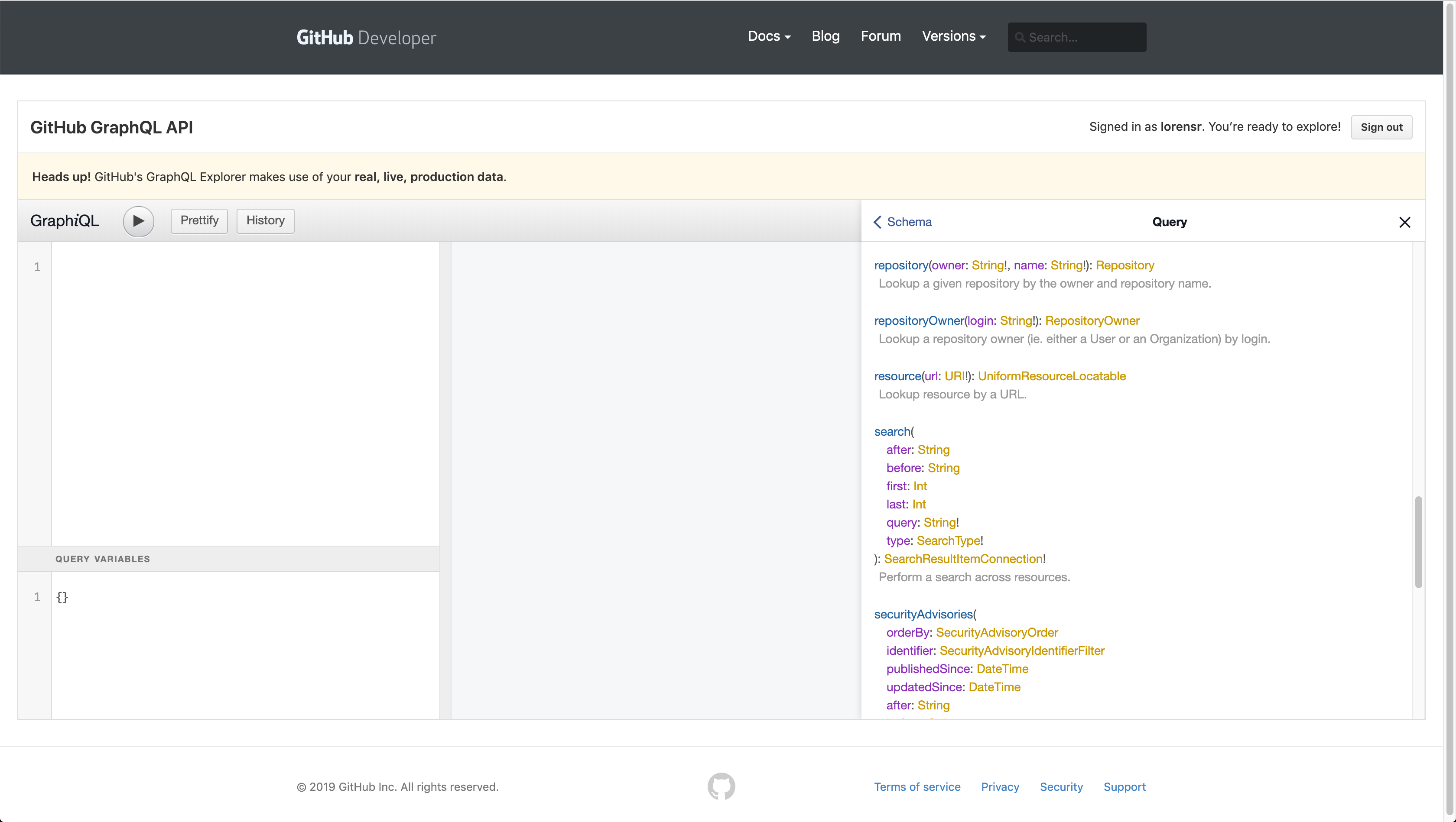 Clicking on the Repository type gives us a long list of fields, including a stargazers field:

And clicking on the StargazerConnection type gives us: 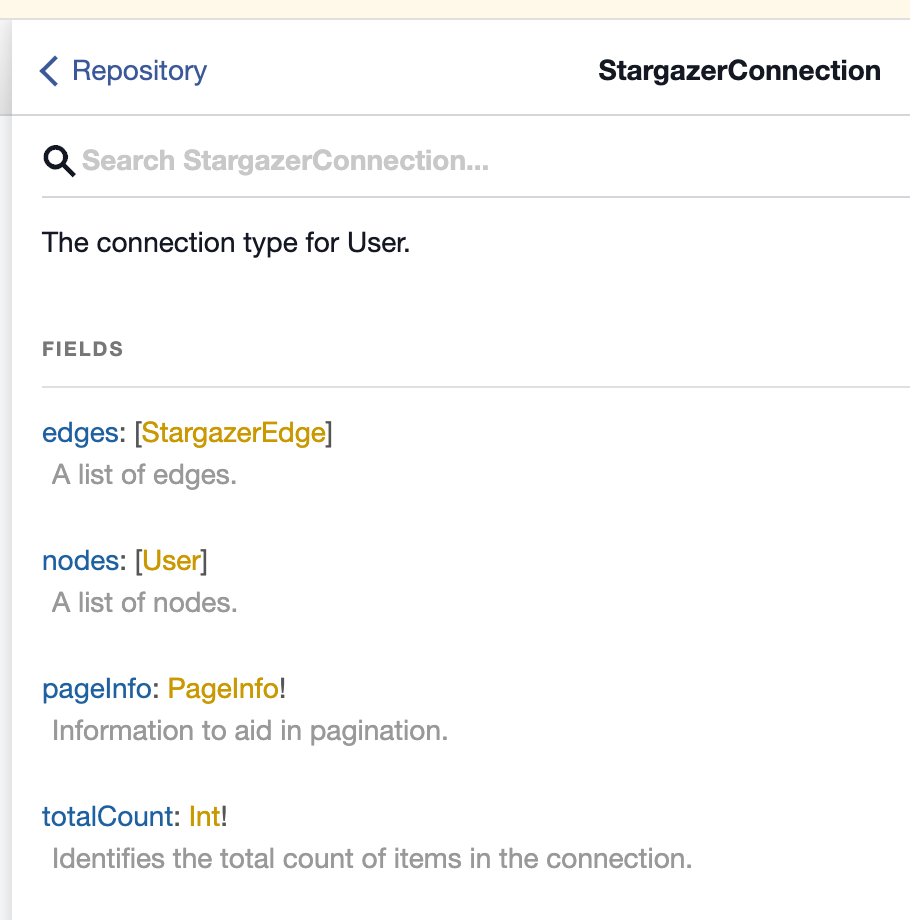 And we find that totalCount is the field we need. Putting all of that together gives us:

We can make this query periodically to keep the count up to date. Let’s create a startPolling() function that does that. When it gets a new number, it will call pubsub.publish():

The first argument to pubsub.publish() is the name of the async iterator and the second argument is the event data, the format of which needs to match our Subscription field in the schema (type Subscription { githubStars: Int! }).

Next we need to call startPolling() on startup. The place where all the other data sources are included seems a fitting place:

The last change we need to make is to our context function:

We’re getting a req argument and assuming that it has headers.authorization properties. But actually, req will be undefined for subscriptions. So let’s guard against that:

Now we test out our new subscription: 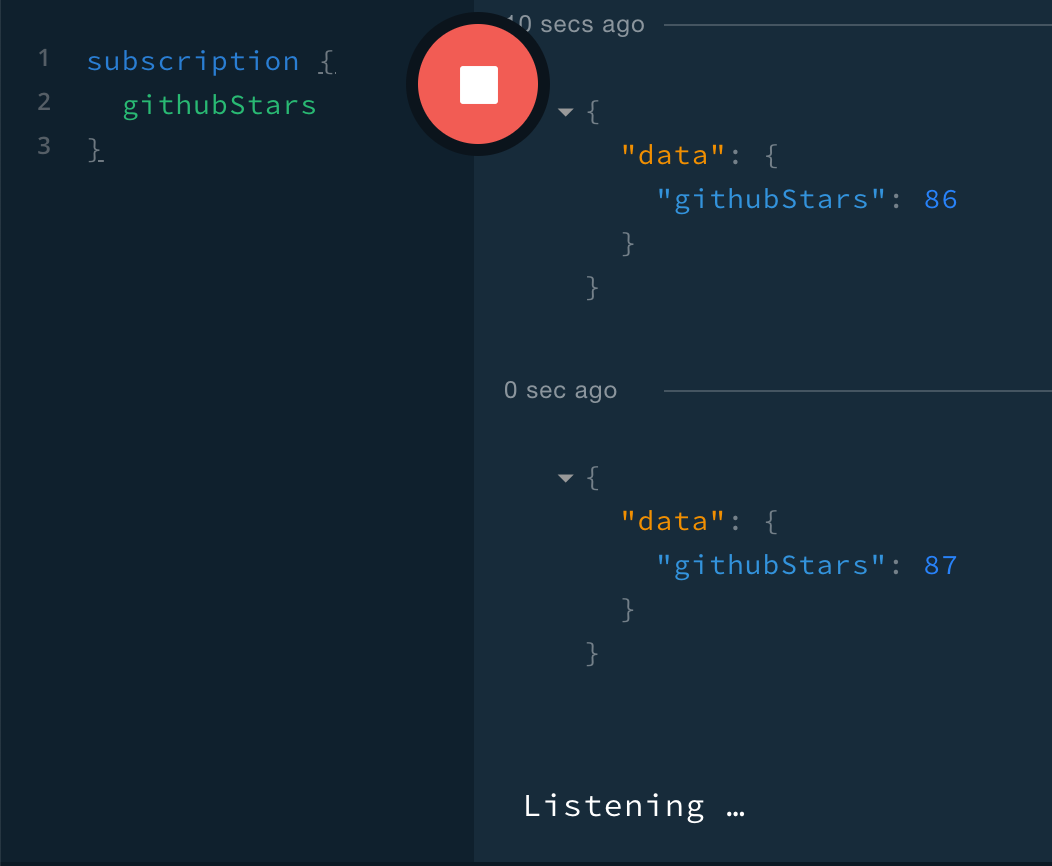 When we hit the play button, it turns red, but nothing appears on the right—that’s because we haven’t received an event from the server yet, because the server only publishes when the value changes. But if we star the repo, we’ll see an event of the form:

And when we unstar the repo, we see another event with the number one lower. Great, we’ve got realtime updates! 🙌

Well… depending on your definition of realtime. Since we’re polling once a second, we might lag around a second. In the next section we’ll see even faster updates, where the publish happens as soon as the server receives a user’s action.

Lastly, let’s see what the WebSocket communication looks like. If we open devtools Network tab, hit the stop button in Playground, hit play, unstar and re-star the repo, select the graphql item in the list on the bottom-left, and select the Messages tab, we’ll see something like: 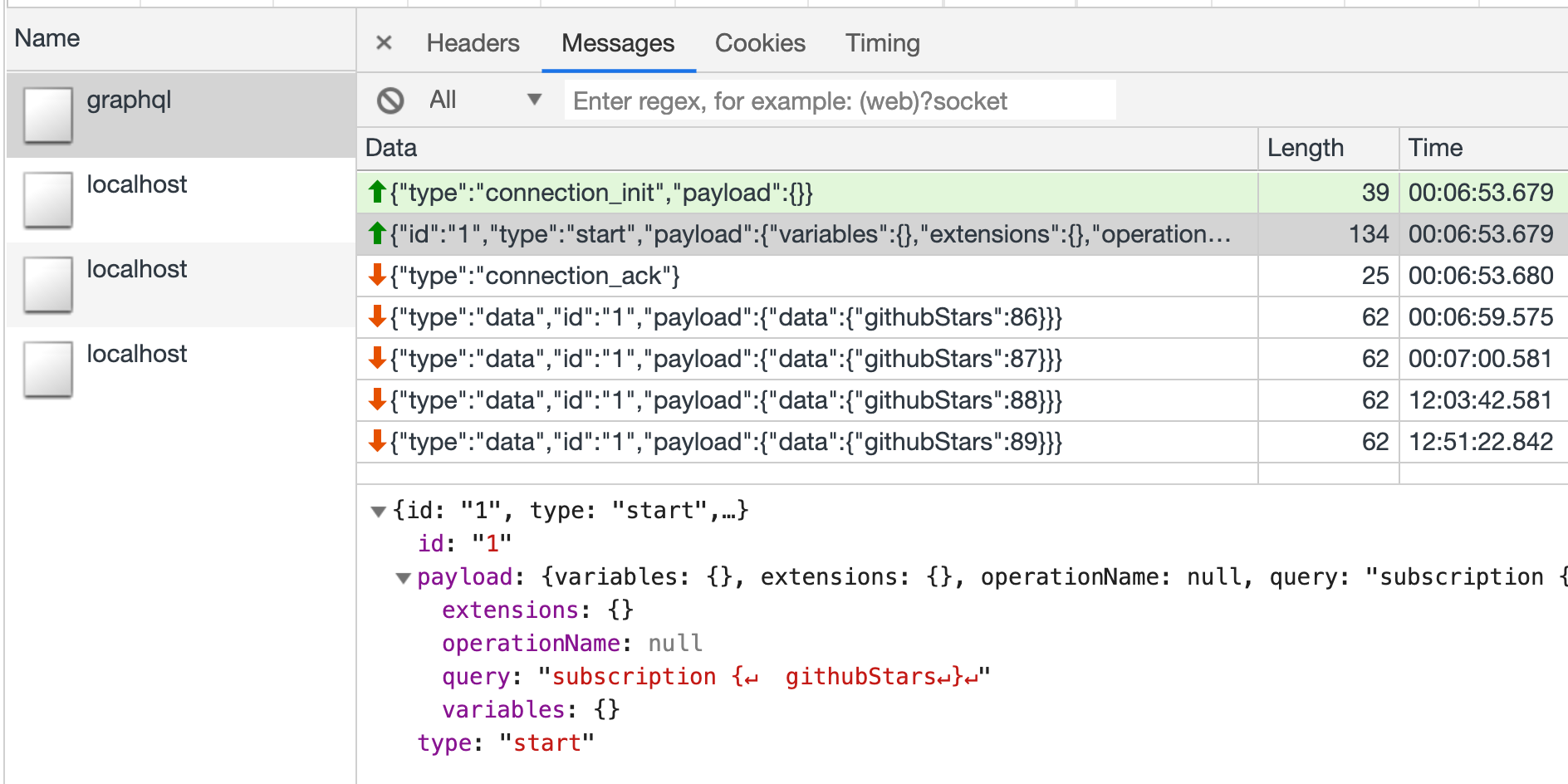 Then the server sends a message with type connection_ack (acknowledging receipt of the connection_init), and messages like this:

Similar to how Playground took our subscription document and put it in WebSocket messages in the right format, and how it parsed the response messages and displayed the payload on the page, most of our clients will be using libraries that take care of the messaging part, so that all they’ll get is the payload object: {data: {githubStars: 89}}.

Let’s start with the schema!

Now we only need to do two things:

The second argument to pubsub.publish is the event data, which needs to match the schema (reviewCreated: Review!): a reviewCreated attribute with an object of type Review for the value.

Aaaaand we’re done! That was easy. To test, we start the subscription in one Playground tab:

And create the review in another:

Now when we go back to the subscription tab, we’ll see the event:

Other common types of subscriptions include when objects are edited and deleted: